Private redials are different from Common redials as the lead is assigned a Lead Owner when they are set. This ownership is maintained until the Private redial is released for some reason. Furthermore, Private redials can be dialled across campaigns so that, even it you are calling on one campaign, Private redials from a different campaign can be pushed through and called when their scheduled dial-time is due.

When you have the lead on the line, you simply tick the box “Private” and set a time in the dialling panel on the contact page. There are multiple time settings that you can use to make sure the scheduled redial fits the preferences of the lead. 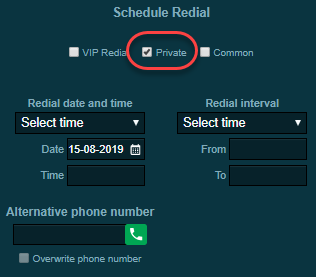 When the redial time has been set simply click “Redial & next” to schedule the Private redial and proceed to the next lead. Once the Private redial is set, it can only be changed in Lead Admin or through operations via the API (Hero Flows, for example).

In some campaigns it is important to make sure that the redial is placed on-time (or very close to the time agreed with the lead). In other Campaigns it is more important that the lead gets to speak with the same agent again. To accommodate this difference there are some settings in the Campaign settings that deal specifically with this part. You will find these settings under Campaign settings/Dialer settings (full article about topic can be found here.

When a Private redial is released, the status will still be Private redial but the ownership will be changed to the original lead owner (the one you set when you uploaded the lead). This way, any member of the team can get this redial and follow up where the previous agent left off. In the example below, I have set the Private redials to be released to the rest of the organisation after 3,5 hours: 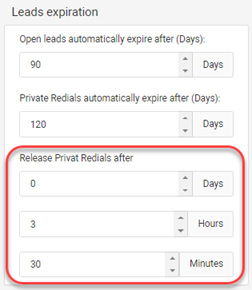 When you decide to deactivate a campaign, you need to consider if the Private redials in this campaign should be called or not.