These settings quite simply tells the system when this campaign is active and when it is not.

“Active”, in this case, means that the campaign is open for the agents to work on.
“Inactive”, of course, hides the campaign from the agents on the Campaign selection page. If you are an administrator, you can still do administrative tasks on the campaign (like upload leads, change settings and suchlike). It is also possible to create and call a lead on a campaign that is inactive.

Start by setting start and end dates for the campaign. Just leave either of these dates blank of you don’t need a start date or want the campaign to run forever. In my example, I would like the agents to start calling on the campaign on the 3rd of December and the Campaign will not have an end-date but rather run until there are no more leads to call

When it comes to the weekly schedule, the settings are pretty simple. You simply tick the boxes on the left to tell the system what days the campaign is active and then add the start and end times for each day.
In my example, the campaign is scheduled to run afternoons on weekdays only. My agents leave work at 17.00 on Fridays so I’ve agreed with my customer to let them start a bit earlier on Fridays only: 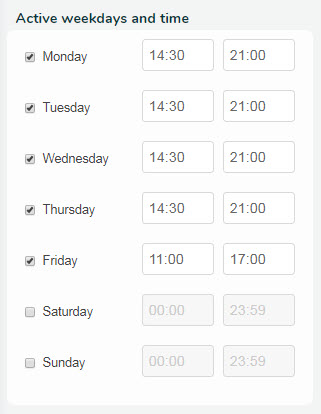