In your efforts to limit the amount of attempts you are using to get in touch with the leads, you have a range of control options in Hero Outbound. These controls are refined so that you optimise the attempts to fit perfectly with your lead pools and campaigns.

There are two types of attempts in Hero Outbound:

When you set a number of global attempts, you tell the system that “regardless of the status of the lead, I want to limit number of attempts to the amount I enter in this box”. When you use this option, you will only be able to use selective choices to include or exclude Private and VIP-Redials. If you need to further differentiate the max attempts, scroll down to “Selective Attempts” below. Selective options below.
In the example below, I have set my global attempts to “10 Contact Attempts”, included Private redials but excluded VIP-redials 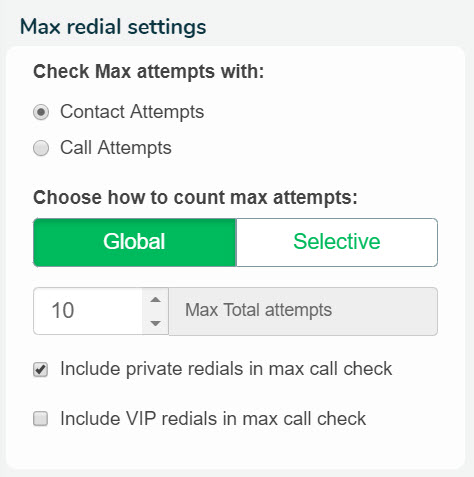 The Selective controls for maximum attempts take into account the changing status of the leads. It will count each attempt and add a “tick” in the box corresponding to the lead status when the attempt occurred. When one of the limits have been reached, the lead will be closed due to maximum number of attempts.
In my example below, I would like to focus my Call Attempts on the Common, Private and VIP-redials and close the leads with Automatic redials a bit sooner. I’ve left the box for VIP-redials blank. This means that there is no limit to how many attempts I can make to a lead who has the status VIP. 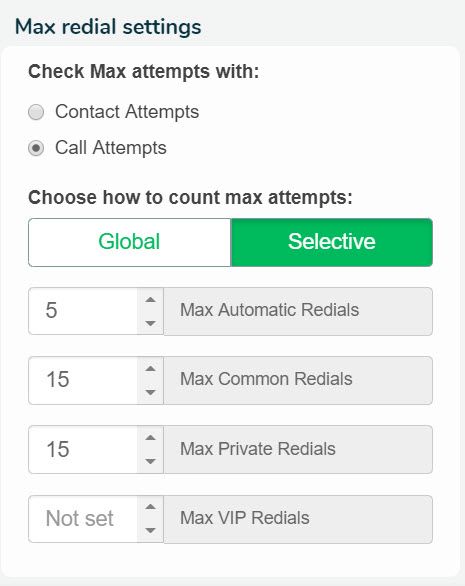