In some cases, you may want to delete the calls recordings from historic conversations. This could for example be because of interpretations of GDPR or other reasons. When you have chosen to record conversations in Hero Outbound, the resulting audio files are deleted after a period that you have agreed in your contract (Default: 93 days for successes and 31 days for non-successes). These periods are configured for your entire corporate and applies to all Projects and Campaigns. If these storing periods suit you needs, you do not have to do any further configurations.

If the corporate storing periods are not sufficient, you can always set shorter storing periods in the application. This can be set either individually on campaign level or for all campaigns in a Project. Further down in this article I’ll explain both methods but first some important information about differentiation of the audio files to be deleted:

IMPORTANT: The status (Success/Non success) is determined by the status the lead got in the call where the recording was made. So, in essence, if you end a call with Private redial and then edit the lead manually and set it to "Success", the call will be deleted according to the deletion rules of Non success (since the call ended with a Private redial).

You can also differentiate the storing periods between the Full conversation recording and the Partial recording. “Partial” means the recordings that were started and stopped by the agents during the conversation (for example to separate the agreement part from the rest of the conversation).

In the screenshot below, I have set all partial recordings to be stored for 50 days and all full recordings for 10 days: 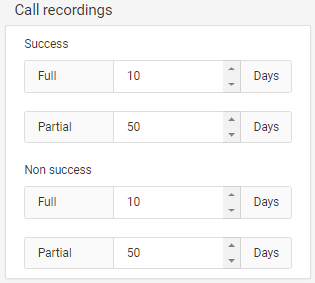 Of course, you can combine the 2 types of differentiation like in the example below: 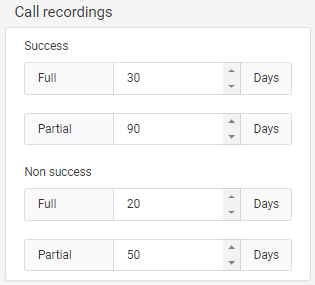 As mentioned above, there are various places the storing period can be set. These places should be considered as “levels” where the higher level sets the limit for the level(s) underneath. If, for example, your corporate level says that you store success-recordings for 90 days, you can set a storage period at the Project level to 90 days or shorter. Consequently, you can only set the storage period on the Campaign level to a period shorter than what is configured on Corporate and Project level.

If you run into a situation where your client wants you to store recordings for a longer period than your Corporate setting, you need to get in touch with us at HeroBase and we will sort this out by extending your maximum storage period.